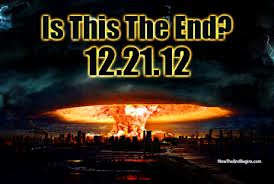 My apocalypse will not be a one day affair, because the world does not end that way. The human race is not going to get off as easy as a comet smashing into the eath.
My apocalypse leverages the prophecies of Nostradamus.

Nostradamus was a sixteenth century seer who had an uncanny ability to predict the future.


In The Prophecies, he compiled his major, long-term predictions in a series of quatrains, grouped into nine sets of 100 and one of 42, called "Centuries".


Nostradamus has been credited, for the most part in hindsight, with predicting numerous events in world history, from the Great Fire of London, and the rise of Napoleon and Adolf Hitler, to the September 11 attacks on the World Trade Center. 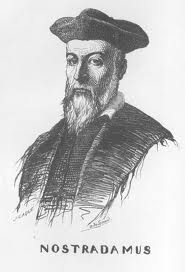 "In the new lands of American, three brothers now shall come to power
Two alone are born to rule but all must die before their hour
Two great men but brothers not make the north united stand
Its power be seen to grow and fear posess the eastern lands

Man, man your time is sand
Your ways are leaves upon the sea
I am the eyes of Nostradamus
All your ways are known to me”


- Al Stewart
The above verses were quatrains that Al Stewart paraphrased for the final song on his album Past Present And Future (go buy it if you don't own it-it's a classic).

Nostradamus' original verses have been interpreted as predicting the rise to power of the Kennedy clan, as well as the creation of the European union, the death of Pope John Paul I and the deconstrcution of the Berlin wall.


Nostradamus had hit other twentieth century events dead on, most notably his prediction of an evil warlord named Hister, the German of the crooked cross.
My apocalypse continues the decline Nostradamus predicts.
Sorry, no fire and brimstone, tidal waves or earthquakes-we are all going to have to live through every painful minute of it, knowing that we had chances over the last two decades to right this ship (Alan Keyes, Ron Paul), and we chose deception and mediocrity over true leadership. 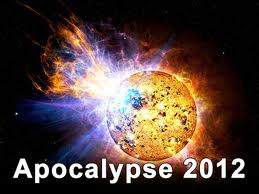 So, continuing the apocalyptic timeline…


(1)    The population of the Earth grows increasingly dumber (think “Idiocracy”), resulting in the election to President of the spawn of a demon and a human woman, born in Kenya in 1961.


(2)    At the same time, the European union foretold in the verses above will start to crumble due to the proliferation of fiat currency and insurmountable government debt funded by printing money.


(3)    China continues to fund the overspending of the west, and in 2036 takes posession of Hawaii, San Diego and Arizona’s Grand Canyon in exchange for forgiveness of 25% of the accumulated US debt. President Malia Obama had offered Los Angeles and San Francisco for another 25% but China declined. Too friggin’ liberal.
This fulfills the Biblical prophecy of moral decay and decadence.
"But as the days of Noah were, so also will the coming of the Son of Man be." (Matthew 24:37 NKJV)

The Bible says in Genesis 6:11-13 that: “The earth also was corrupt before God, and the earth was filled with violence. And God looked upon the earth, and, behold, it was corrupt; for all flesh had corrupted his way upon the earth. And God said unto Noah, The end of all flesh is come before me; for the earth is filled with violence through them; and, behold, I will destroy them with the earth.”
(4)    In 2040, Islamic terrorists take control over the entire air traffic control system, but realize if they bring the US to its knees, which they could easily do, we’d stop buying oil, and basically China and OPEC would be the only ones hurt. They return control of the air traffic system to the US in exchange for one hundred cases of Twinkies. Although the snack cakes had not been manufactured since 2012, there was still a quarter century left on their shelf life. President Sasha Obama had tried to negotiate Los Angeles and San Francisco in exchange instead of America’s last Twinkies, but again there were no takers.
This fulfills the Biblical prophecy of the increase in knowledge (air travel, technology).
Daniel 12:4 says: “But thou, O Daniel, shut up the words, and seal the book, even to the time of the end: many shall run to and fro, and knowledge shall be increased.”

(5)   Former president Malia Obama marries Kim Kardashian's son and her son, Barack Hussein Obama-Kardashian, although born in Hawaii, moves to Kenya, applies for dual citizenship and eventually runs for public office. In 2046, President Obama (Sasha) declares war on Lichtenstein for refusing to allow US inspectors to examine their weapons of mass destruction.  When asked how she knew about the weapons, President Obama III said, "I looked at the receipt," outing her sister and predecessor for selling the nukes to the small principality.
This fulfills the Biblical prophecy regarding nuclear weapons that are used in the Tribulation.


(6)    In 2066, the United States files for bankruptcy, and discontinues aid to Israel, who promptly declares war on the economically depressed nation as Jewish Americans repatriate to Israel in alarming numbers, taking with them what little business remained in the country.  surrenders
This fulfills the Biblical prophecy regarding the nation of Israel.
In Zechariah 12:2-3 the Lord declares


The return of the Jews to their homeland is foretold in many different places in the Bible including Ezekiel 36:24 which says: “For I will take you from among the heathen, and gather you out of all countries, and will bring you into your own land.”

(7)   For the rest, just go read the Book of Revelations in the Bible. And you may want to make friends with your Mormon neighbor, since they have a year's supply of food stores on hand.

So don't worry, the world won't end today. Go buy those Christmas presents...pay the mortgage, and show up for work wearing this tee shirt... 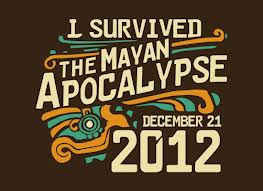 But start making friends with your Mormon neighbors...they have a year's supply of food stores on hand and who knows if I have some calculation errors in my timeline? 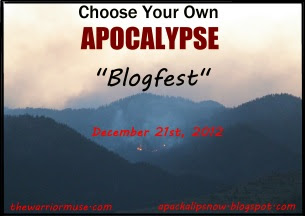 Posted by DiscConnected at 1:00 AM 23 comments: