CAREFUL WHAT YOU WISH FOR 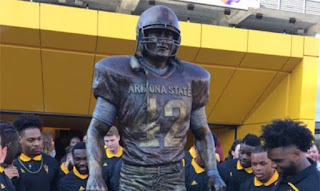 Tillman played at ASU from 1994-97 before entering the NFL as a seventh-round pick of the Cardinals. He spent four seasons playing safety before giving up his NFL career to join the United States Army in the wake of the September 11 attacks.

Tillman was killed in action in a friendly fire incident in 2004.

While I did not share Tillman's fervor for the cause to which he gave his life, I do respect that he felt strongly enough to abandon such a lucrative career, and in no way is this post meant to discredit him.

However, Arizona State coach Todd Graham said players will touch the statue for luck as they make their way from the locker room to the field in what he said he hopes becomes a tradition forever.

In case you missed it a couple of sentences ago, Tillman was killed by friendly fire.

Since when is that lucky? 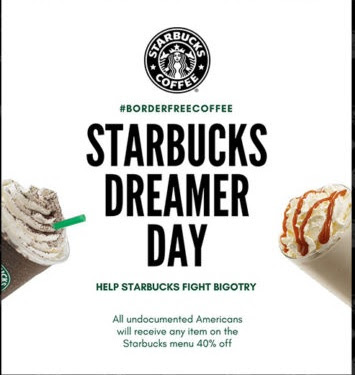 Starbucks will give all undocumented Americans 40% off of any item on the menu!

This is a great idea, as few are as in need of an economic break as the undocumented, right?

But before you leave the jobs that no one wants to do on August 11, stop and think....

HOW does one prove they are an undocumented American?

It's a hoax of course, but it makes me wonder how much of a discount La Migra is getting?

Posted by DiscConnected at 11:47 AM 2 comments: